Adriaan Weststrate, a stalwart supporter of the global poultry industry and one of the driving forces behind the International Poultry Council since its beginnings, was honored by the IPC this week as its first-ever “Poultry Person of the World”.

Weststrate recently retired from Rabobank after 27 years of service, 25 of them as Head of the Wholesale Banking Atlanta office. During that time, he aided the industry through its research and his leadership.

He was honored in a virtual ceremony in which he was presented with a commemorative plaque by IPC President Robin Horel.

The inscription succinctly summed up his contributions: “In recognition of his enthusiastic support which has led to the development of the International Poultry Council as the representative organization of the global poultry industry.”

“This is fantastic. What an honor. I’m humbled by it. Not in my wildest dreams did I expect this,” Weststrate said.

“When I look back at all those years at IPC, not only has the organization put itself on the map globally as the representative organization for the poultry industry, but we’ve created a group of people who have so much fun seeing each other at our meetings.”

USAPEEC President Jim Sumner, the longtime president of the IPC, said to Weststrate, “You’ve been so supportive of IPC. We just wanted you to know how much we appreciate you. You’ve been there with us since the very beginning and were always there to help us in every way. You were our go-to guy, and an inspiration to all of us. The IPC would not be where it is today without you.”

Weststrate also has been very active on the board of directors of the World Poultry Foundation. 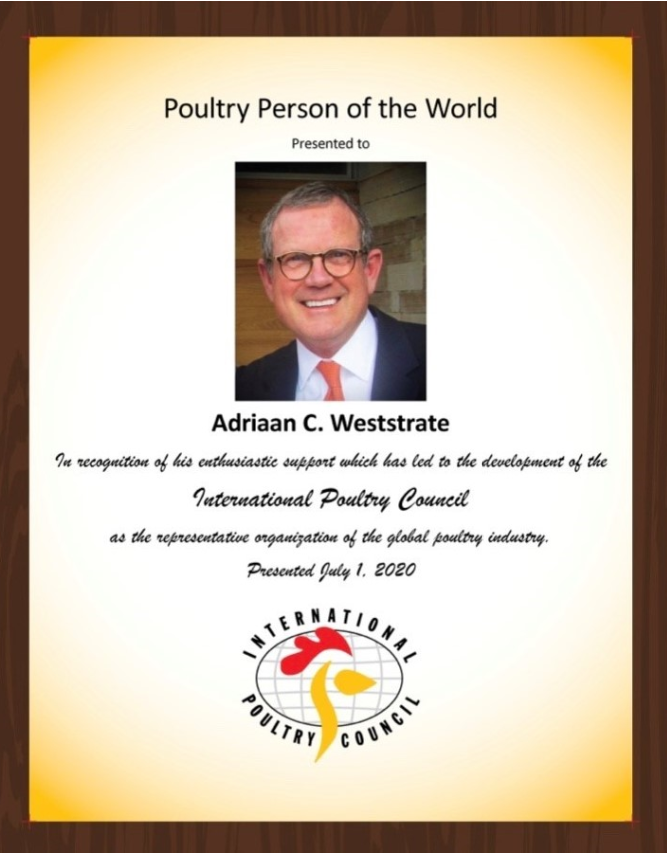 PrevPreviousIPC First Semester meeting postponed to April 2021
NextIPC statement on Covid-19, poultry meat safety and tradeNext
Scroll to Top
We use cookies to ensure that we give you the best experience on our website.OkNoPrivacy policy